Living Structures: “are defined as the use of forces and possibilities given by natural living organisms to help and build low-cost and sustainable construction”.1 (Courard. L., Thomas. V.,2017)

Baubotanik: is defined as a fundamental approach to engineering with living plants: using the interaction of technical joints and botanical growth to form building techniques.2 (Wikipedia)

This study is part of the research series that will be explicitly argued within a more comprehensive subject under the eco-centric architecture practices, research, and teaching methods GAD Foundation pursues. Hence, this study reveals current innovative techniques and details to expose the features of living structures in architecture – growing architecture – particularly investigating the BAUBOTANIK concept among others such as biomimetic, ecosophy, biophilic design, ecological architecture, arcology, etc. which will be scrutinized on upcoming weeks.

The revision of our use of building materials is a major concern for architects and designers today. The discussion in this realm should revolve around not only finding alternatives for sustainable and climate-neutral construction but also understanding whether our buildings can still be perceived as in contrast to "nature," or the building itself should not be seen as a biological organism's approximation.3 Since nature is in equilibrium, thanks to the mechanisms they have developed over millions of years, organisms try to adapt to the environment and survive in the environmental conditions where they exist. Baumeister explained this process as a research and development process. Scientists state that nature has accumulated the solution methods they have developed against fundamental problems (especially in matters such as energy and materials) in a "large data inventory" and this information should be used to solve similar problems experienced by modern human beings today. Particularly to solve problematic conditions like accessibility to resources, climate change, sustainable built environments, and more importantly degrading negative human effects on ecosystems, researchers have started to punctuate biophilic research and development activities. Built environments are accounted for the environmental and social problems they create by consuming large amounts of resources, producing non-recyclable waste, and greenhouse gas emissions. However, with the increasing environmental awareness, innovative solutions and techniques are expected from the “architecture” discipline that offers the use of greener materials, more performative buildings, and architecture-nature cooperation for a more sustainable environment. In this context, designers continue to seek to create sustainable buildings/cities and to create symbiotic organisms between the natural environment and the built environment.4

These quests lead to the development of different architectural approaches. These approaches, which can be gathered under the name of eco-centric architecture, benefit from the "data inventory" in nature for "effective" solutions rather than “visual/aesthetic” goals. In other words, the nature-architecture relationship moves away from "analogical" approaches and leaves its place for learning that reaches the "metaphorical" level.5 Growing architecture is one of these attempts to design and construct sustainable, ecological, and low-cost structures benefitting from natural organisms’ features and potentials. In this ideology, trees and plants are used as a core material in the planning and construction process without damaging their natural characteristics and formation as if they become part of the structure in the latter stages. As trees grow, they become part of the whole structure, not only as of the main structure but also as an element combining natural and artificial materials. In this study, the Baubotanik approach is examined in detail as one of the methods under the living structures ideology to explore the aesthetic, ecological, constructive, and processual potentials of growing architecture.

Designers, planners, stakeholders, and architects understand that anthropocentric notions shape today’s living environment dramatically dismantling, they started to popularize ecocentric/biocentric approaches, which embrace the ecosystem as a whole means to care for the benefit of the whole and value the existence of each living being. When we take a look at the history of architecture there are several architectural examples that are naturally inspired such as columns like tree branches and lightweight construction rigid shells like cobwebs. Among those structures, trees are the most observed ones that took designers’ and architects’ attention a lot and were an inspirational source (Knippers et al.,2016).6 Trees are seen mostly as structural elements rather than visual motives for designers. As we can see from Gaudi’s works, while observing growth and branching on the tree, he also discovered that this knowledge can be an answer to the problem of load distribution that needs to be solved in architecture, considering the relationships between roots, trunk, branches and leaves, and the distribution of loads. He saw trees as a mentor and these are so obvious in his works in a way, he solves such architectural and statical problems. When we take a look far back, John Krubsack faces us with one of his first examples of a living structure called a grown chair that is made by training/shaping living trees growing for 7 years when they are young. In 1925, Axel Erlandson shaped more than 70 trees and made an exhibition in 1947. They are still alive and can be seen at Gilroy Park. Landscape architect Arthur Wiechula highlighted many examples of growing architecture to illustrate how the concept of living structures may be useful in spatial organization. Although the above-mentioned examples do not carry eco-centric architectural concerns “comprehensively”, some examples where this structural approach turned into “architecture” and holds eco-centric notions have started to show off in the last four decades. 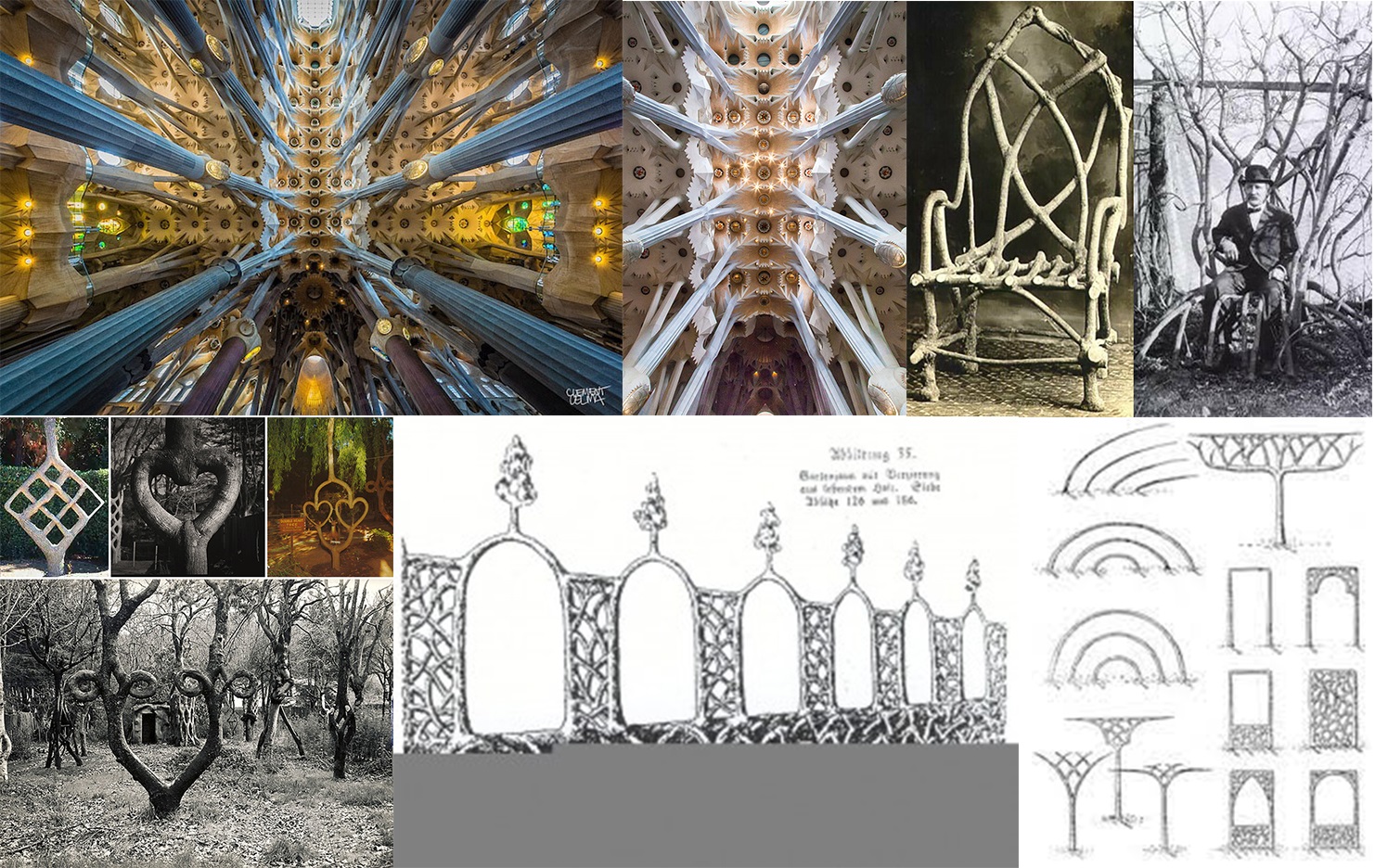 Baubotanik is seen as one of these notions embedding a vegetal component with metal scaffolding and other construction components to create a growing and living structure concerning eco-centric approaches.7 However, before discovering the Baubotanik concept in detail, one needs to embrace some previous examples that triggered the emergence of the Baubotanik concept. Auerworld Palace project, by Marcel Kalberer and Sanfte Strukturen collaboration, can be evaluated as one of the first botanical architecture examples with adaptable sensitive, alive and natural climate cycled structures. These constant changes in the growing process of trees enable users to encounter different spatial experiences diversifying at different seasons. Later on, Visiondivison – a group of Swedish architects – designed the Patient Gardener project with an 8m dome structure that constantly has been bending over as trees grow and articulate an inner temporary skeleton to constitute the first floor of the living structure. As these examples increased, the term Baubotanik was coined at the University of Stuttgart's Institute of Modern Architektur und Design (IGMA) including Dr. Ferdinand Ludwig who is pioneering in this concept. It combines the domains of research and development, allowing architects, engineers, humanists, and natural scientists to imagine and execute ideas that incorporate living plants within the different perspectives specific to the individual disciplines. As the trees grow older, their fused joints strengthen and giving them more load-bearing support. Indeed, the ability of growing trees to embed alien materials such as metal and plastic emphasizes the potential of Baubotanikal structures in architecture and urban design. It is basically utilizing the benefits of the “constructive intelligence” of trees. Simultaneously, the notion exposes architects and practitioners to the bio-dynamics and unpredictability of natural growth. By embracing this struggle, a new type of architectural understanding emerges, highlighted by chance processes, hope, and risk.8 As explained by Dr.Ferdinand Ludwig, the practice was inspired by the ancient art of tree shaping. I came in touch with some historic examples of living architecture while I was studying [at the University of Stuttgart] and was fascinated from the first moment on,” he explained. “The vision is a new way of integrating trees in architectural and urban design.”9 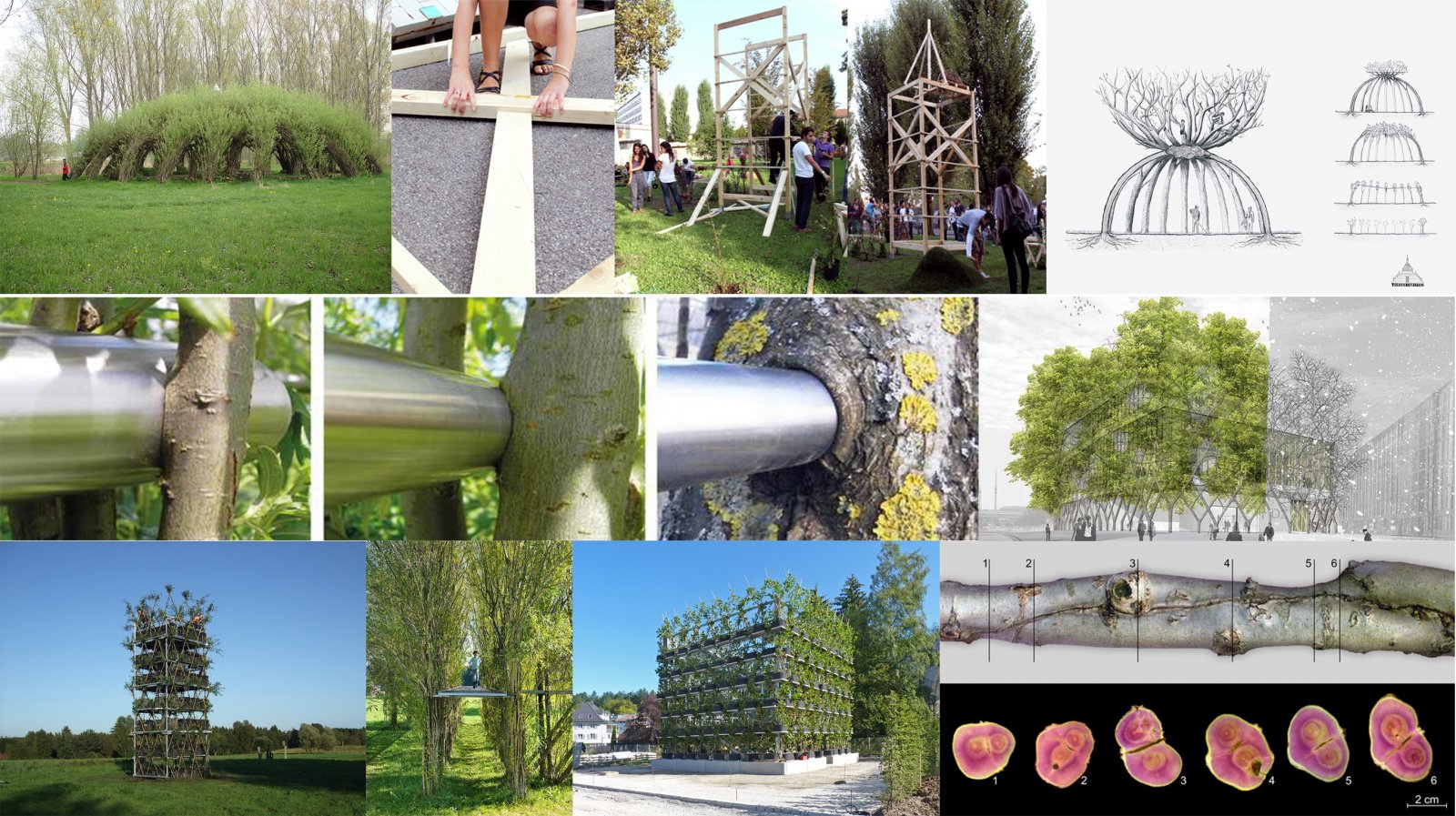 One of the recent and inspiring projects that embrace the ideology of using growing architecture notion at a very-well synthesized level is Gokhan Avcioglu’s Borusan Music and Art House Istanbul project. The diagrid system of diagonally intersecting metal beams is the project’s must-see part representing itself as important structural innovation. In the design for the Borusan Music House, a diagrid of steel beams was the basis for an architectural strategy facilitating the realization of state-of-the-art music and exhibition space within the historical fabric of Istanbul’s 19th-century district of Beyoğlu on Istiklal Avenue. The building’s architecture transforms the historic neo-classic building retaining its façade but facilitating its new functions through a completely new structure. Through the realization of this innovative construction approach and technique, Avcioglu built his ideas on the foundation of living structure ideology and growing architecture concept. It seems one of the novel examples underlines the idea of the Baubotanik concept. He started to develop his ideas on constructing an inner building core and the façade grounded on a tree structure formation. Constructing out of natural resources - living construction materials that can also be part of the oxygen cycle by contributing with photosynthesis as a living organism that has self-healing abilities has become the project’s and architect’s fundamental ideology. While biotechnologies such as tissue and genetic engineering are an approach to the matter on the smallest scale, the opportunity of growing our construction elements biologically by shaping them into what we need may be a promising way to build our future structures. In this respect, Avcioglu shares the view of Professor Rachel Armstrong for 'an ideal architecture' as:

"One that you can plant as a seed having programmed it with all the information it needs to grow itself in an environment where it can organically seek out and connect with the resources that it needs. Through its lifetime it would remain responsive to its surroundings and adjust according to the demands and needs of its human habitats." 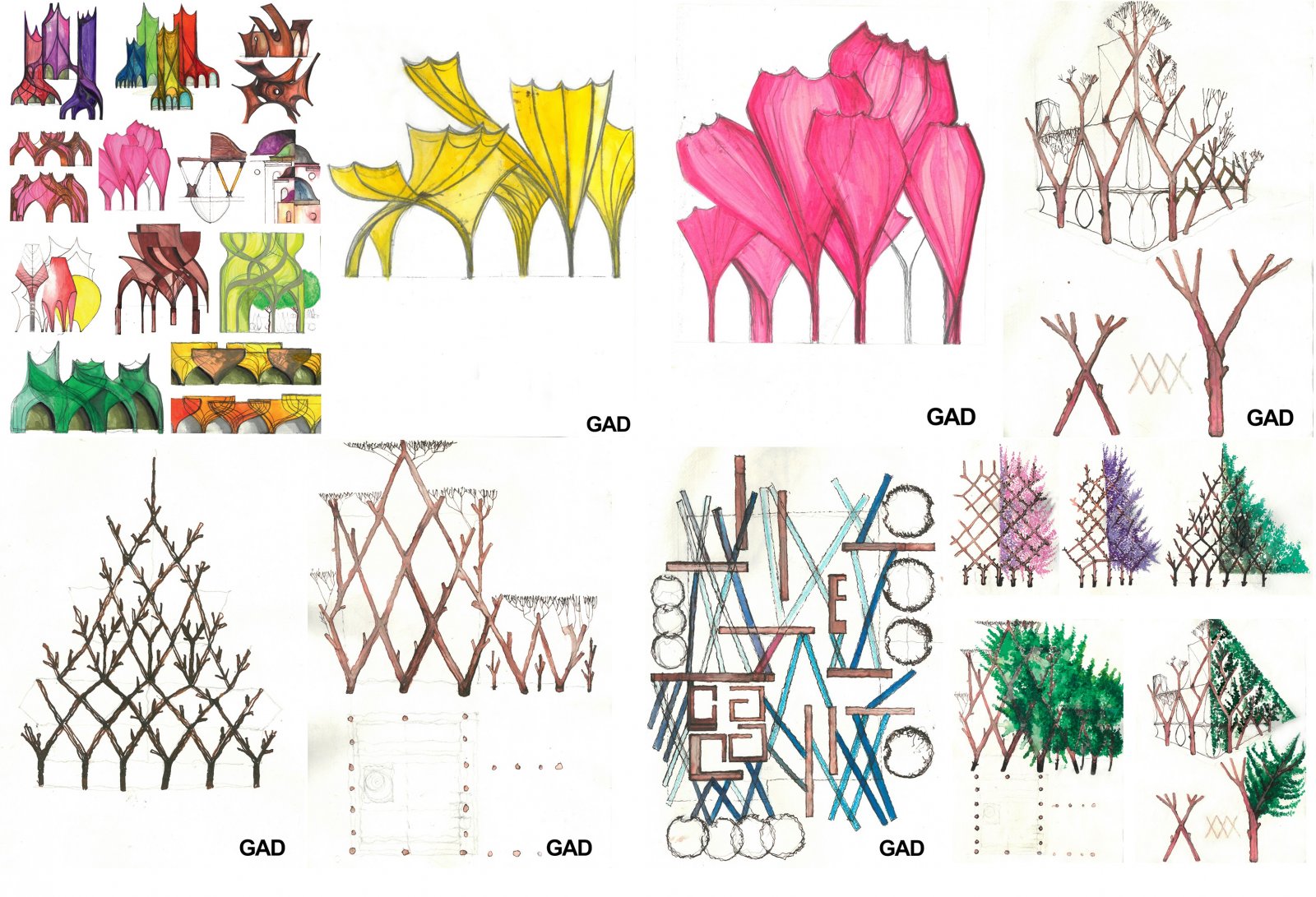 Using trees and their growing process to create a construction is an approach that plays a central role in Borusan Project. As we can see from the sketches of the architect, he tried to deal with new building typologies that redefine the relationship between inside and outside, city and landscape, nature and culture. The way he based his idea for the construction derives from the formation and combination of a tree structure where their branches intersect and articulate each other as an integral part of the whole structuring system. Then, they turn into structures that hold the whole building core and represent itself also on the façade system. The trees and plantation will become part of the whole structure as they grow and be shaped. In this way, thinking and grounding the ideology of living structure and the concept of growing architecture enables us to benefit from eco-centric architecture and particularly the Baubotanik concept. 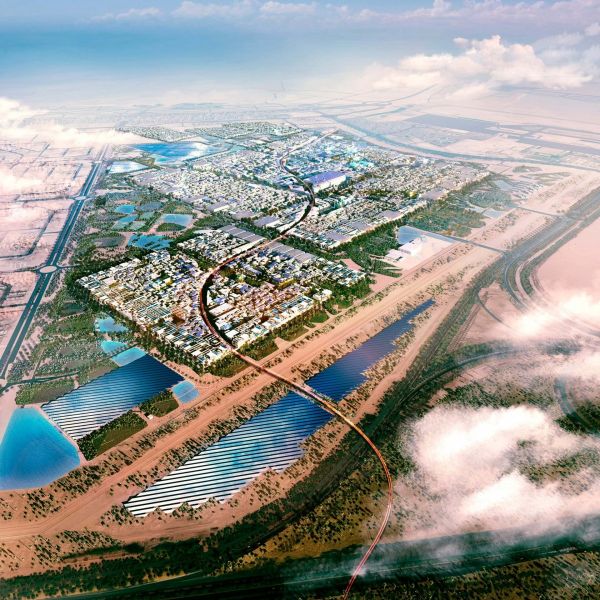 Settle(ing) Through The Lenses of Nature 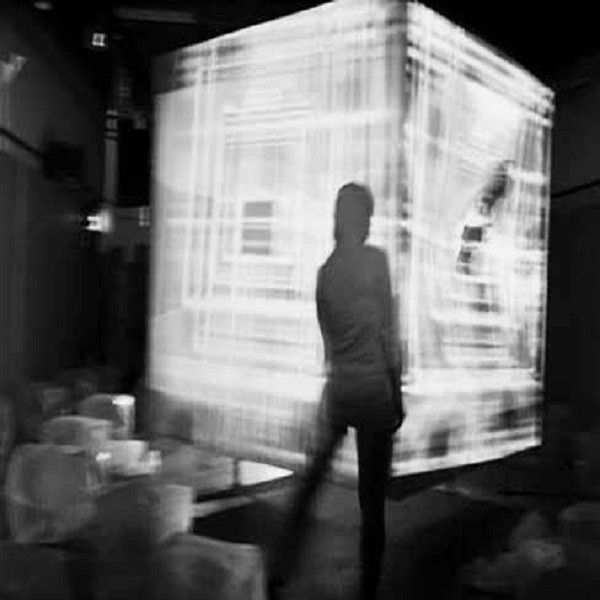 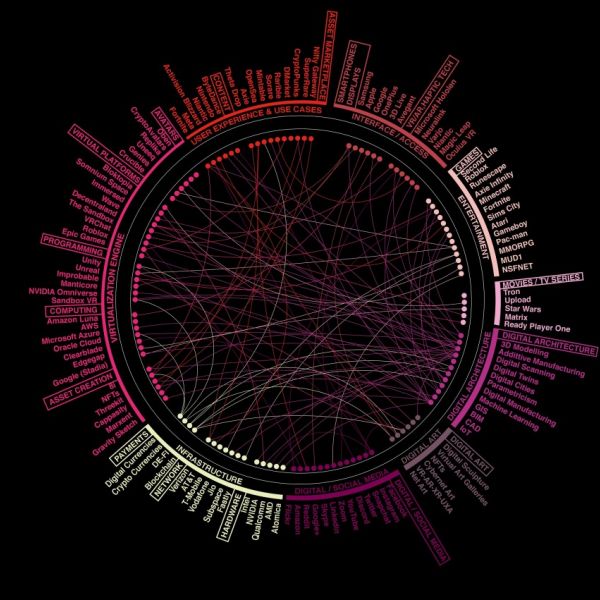 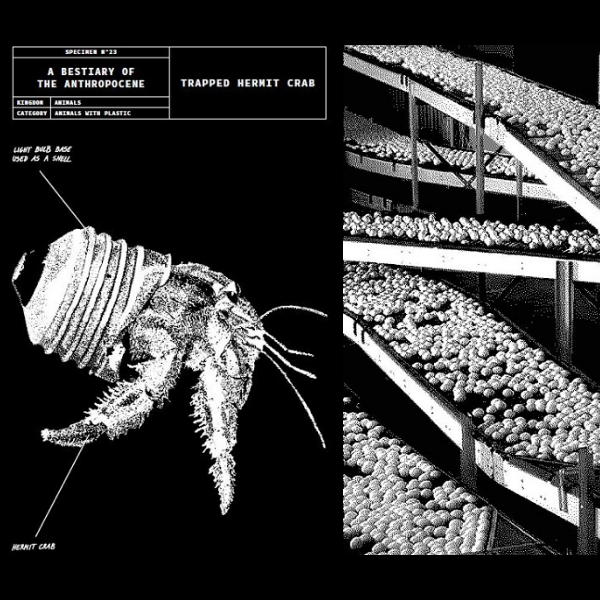